The City of Woodland Park asks that all motorists, pedestrians and cyclists use caution when traveling through the City and follow all restrictions. Please watch for advance warning signs alerting motorists to changes in traffic patterns and detours.

The Flashing Yellow Arrow (FYA) means YIELD to oncoming traffic and pedestrians, then proceed with caution. Flashing Yellow Arrow signals are the result of a nationwide study by the Federal Highway Administration (FHWA) that amended the federal standards for left-turn signals. Based on the successful operation of the FYA over the past several years in locations across the United States, the Federal Highway Administration adopted the FYA display in the most recent update to the federal standards governing traffic signals. For more information, you can read the CDOT Informational Brochure (PDF).

The signal operates as follows:

A HAWK beacon (High-Intensity Activated crossWalK beacon) is a traffic control device used to stop road traffic and allow pedestrians to cross safely. It is officially known as a Pedestrian Hybrid Beacon (PHB). The purpose of a HAWK beacon is to allow protected pedestrian crossings, stopping road traffic only as needed. Where standard traffic signal ’warrants’ prevent the installation of standard three-color traffic signals, the HAWK beacon provides an alternative.

A HAWK beacon is used only for marked crosswalks. Similar hybrid beacons are allowed at driveways of emergency service buildings, such as fire houses. 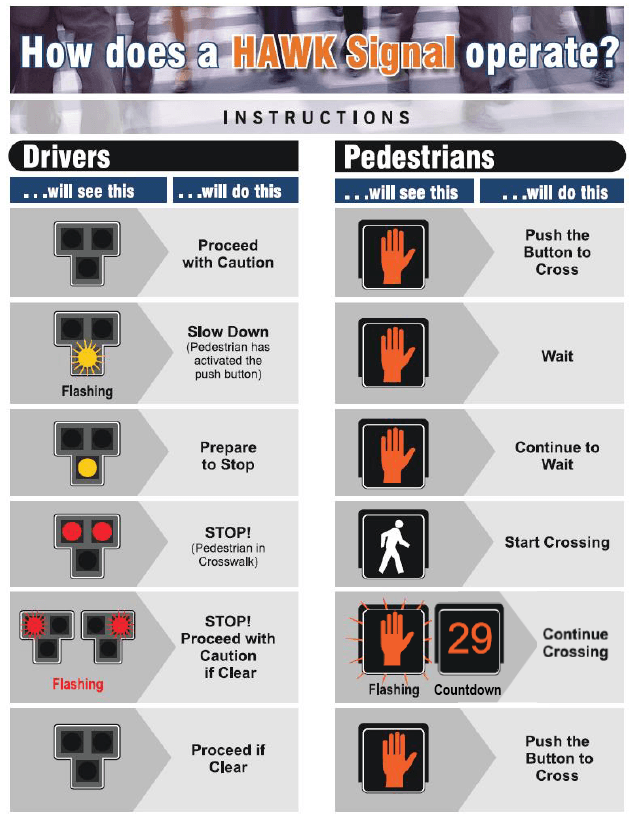